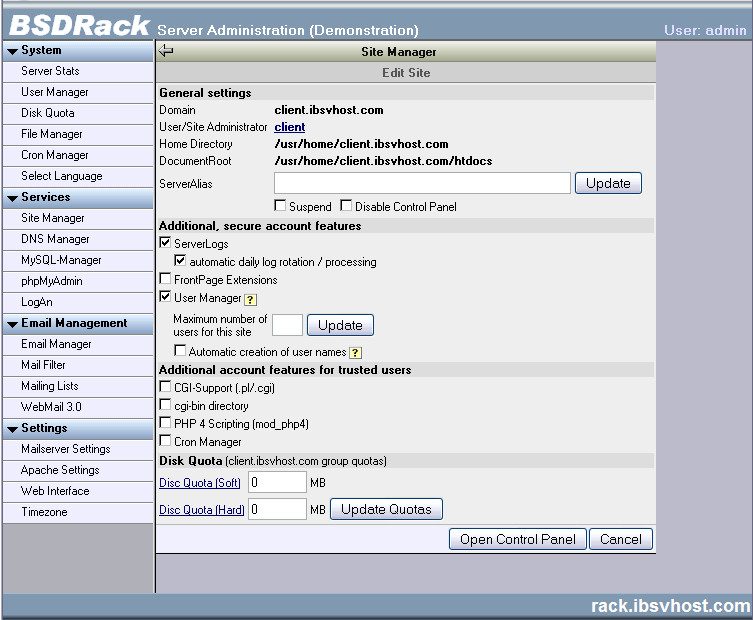 The IBSRack dedicated servers available from Smart Servers and Smart Servers.com have been designed as an alternative to the Cobalt “RaQ” and other types of Linux and Windows based dedicated servers offered by other providers. These servers are an attractive alternative which are competitively priced and suitable for high end web hosting and serving applications for web designers, web hosting providers, ISP’s, ASP’s, Internet consultants and systems integrators as well as corporate and small business applications.

The IBSRack range of dedicated servers utilize the highly secure and reliable FreeBSD operating system and are equipped with an advanced Web Interface Control Panel System. These servers are a robust and reliable solution for mission critical e-commerce and virtual hosting applications and do not suffer from the reliability and security issues experienced by most Linux and Windows based systems.

The IBSRack servers offer full and unrestricted root/superuser access to a FreeBSD Unix based operating system as well as advanced web interface control panels for both the main server administrator and all of the virtual sub-hosting users. The virtual sub-hosting site users can be allowed the ability to create and manage their own user accounts which can be allocated with both hard and soft disk space quotas and a maximum number of user and/or email accounts which can be created by the virtual sub-hosting user can be specified by the server administrator. The IBSRack system includes a complete and dedicated version of the Apache Web server which runs as a standalone daemon and provides support for most of the popular Apache modules. A stand-alone httpd server allows for faster web server response, enhanced security, and increased flexibility and control. You have complete access to your Apache configuration files should you wish to modify or customize any aspect of your web servers configuration.

Each IBSRack server comes complete with it’s own dedicated web, mail, and ftp servers, providing you with full control over all aspects of your servers configuration. With full root access you have total control over your server environment. You can compile and install any software desired, create POP3, FTP, TELNET or SSH users and access all server configuration files.

Unlike dedicated servers available from other providers the IBSRack servers offer you a “semi-managed” server solution at no additional cost in that regular updates of all of the core operating system software including Apache, Sendmail, Perl, MySQL, FrontPage, etc, will be continually updated as the latest versions become available so there is no need for you to have to compile your own versions or install patches and bug fixes as these updates and installations will be handled for you by our support department. Again, there are no additional charges involved for this service.

Another free service with the IBSRack system is daily file backups. All of the data on your IBSRack server is automatically backed up to our central network file system once daily at midnight GMT. If you require the restoration of any data you can request that a specific file or directory be replaced for you from the backup archive or a compressed tar file of all of the data on your server can be provided so that you can retrieve any data that you may require. Again, there are no additional charges either for the daily backup service or for the retrieval of data from the backup archives.

To maximize administrative and end user control over the various features and services on the IBSRack system these servers are equipped with advanced web interface control panels allowing most administrative tasks to be executed easily with a JavaScript enabled web browser such as Internet Explorer 5/6 or Netscape Navigator 4 or better. The web interface control panel system allows you to create and manage user accounts, set up domain based web sites, manage email accounts and aliases, access web site statistics and much more. Both the main administrative and end user client control panels are available in 10 different languages, English, German, Spanish, French, Portuguese, Russian, Greek, Albanian, Italian and Dutch with additional languages to follow in future.

The IBSRack system is equipped with all of the absolute latest versions of the core operating system software and will be continually supported and updated as soon as new versions become available. For instance, the current web server version is Apache 1.3.34 with PHP 4.4.4 and the MySQL version is 4.4.4.

The operation and maintenance of the IBSRack both via the web interface control panels and via the command line will be covered extensively in the following documentation however if you have any questions about the operation of your new system which you are not able to find answers for in either the local documentation provided here or in the extensive FreeBSD related documentation already available on the FreeBSD web site and the various related news groups, mailing lists, user groups and other resources please do not hesitate to ask us for advice or clarification.


Getting Started with the IBSRack

To log into your server via telnet or ssh you should first log in as the “admin” user and then “su” (switch user) to root (command: “su root”) with the admin and root passwords provided in your configuration and login details. Direct login as “root” is not available on these systems for added security. In general, root level access should be entered into only when root level operations are required to be carried out. So as to avoid accidental damage to your server it is a good practice to exit root level access and return to the “admin” level when you are not carrying out root level operations and related tasks. For information on command like operation and maintenance of your server see the section on Basic Unix System Administration & Commands.

The main administrative web interface for the server is located at the following URL’s:

The ADMIN (admin) username and password should be used to log into the web interface and not the “root” username.

Each virtual hosting site you set up on your server will have its own web interface control panel at the following URL:

Telnet login and command line operation and maintenance of the IBSRack is covered in the section on Basic Unix System Administration & Commands.

Found in 1991, Magic Herb started out as a very small family business composed of a man and his wife. The wife, who is a specialized herbalist, came about with several natural and effective formulas all with one goal in mind; to help others lead a healthier lifestyle by findingall-natural alternative solutions. They wanted to give people the opportunity to loose weight naturally and effectively; thus Magic Herb was created.
IBSPoint designed and developed their web site and e-commerce web site, provided their hosting on our award winning Virtual Dedicated Servers

Business Crime Bureau (BCB) is a group of professionals from the Arab world who are specialized in financial, banking, trading, legal and information technology.The bureau welcomes Arabs and non-Arab professionals who are willing to contribute their knowledge and expertise in this field to be a part of the bureau and to help the Arabic speaking community to be better informed.
IBSPoint designed and developed their web site , provided their hosting on our award winning Virtual Dedicated Servers

IBSPoint solutions has been awarded as on the Top rated Web Host Providers by Web Hosting Search, one of the leading sites which provide the most affordable web host providers and web hosting reviews.